Often people come to the United States seeking protection because they have suffered persecution or fear that they will suffer persecution due to: race, religion, nationality, membership in a particular social group, political opinion or sexuality. The United States has a long history of providing refuge to victims of religious, political, ethnic, and other forms of persecution. This tradition reflects a core element of this country’s identity as a nation committed to freedom and respect for human dignity.

Law relating to asylum and admitted refugees is complex and makes it difficult to pursue. There is a large amount of documentation that must be put together very carefully in order to make sure that your claim, if valid, is considered properly. It is important that you find an experienced attorney to handle your claim. Our attorneys know what the USCIS is looking for and are able to find the most important facts regarding your application. We prepare you for what to expect and we make sure your application is complete, accurate and includes most current country conditions.

If an applicant is granted asylum, he or she will be allowed to live and work in the United States.  The applicant will also be able to apply for permanent resident status (to obtain a green card) after being present in the U.S. for one year after he or she is granted asylum.  There is no fee to file for asylum.  One may apply for asylum regardless of immigration status, meaning that someone may apply even if they are in the United States illegally.  An asylum-seeker must apply for asylum within one year of arriving in the United States.  This is a strict deadline that must be considered.  Only in very rare circumstances can one successfully apply for asylum after the one-year deadline has passed.  If you have not filed within the one year after entry, you may still be eligible if one of the exceptions applies. You can also apply for asylum and withholding of removal during removal proceedings before an Immigration Judge. To ensure best results and avoid lengthy delays, speak with an experienced immigration attorney.

Majority of asylum applicants are denied due to incompleteness of the information provided. For best results, it is important to investigate facts surrounding your case fully and present evidence clearly.  Following the Real ID Act of 2005 and other recent changes, people have to present significant amount of evidence to support applications for political or religious asylum than ever before. The federal government’s response to the events of September 11 changed everything regarding how asylum is applied for and granted. If you or a family is seeking asylum in the United States, you will need an experienced attorney to apply various strategies to show the validity of your claim.

Phoenix Asylum Immigration Lawyers at Patel Law, understands how important it is to investigate the facts and prepare evidence clearly and thoroughly to help you get your request for asylum or temporary protected status approved. We know what the government is looking for and are able to find the most important facts regarding your application. We prepare you for what to expect and we make sure your application is complete, accurate and up to date.

Under U.S. immigration law, asylum status and refugee status are different but closely related.  Asylum is the status applied for by a person already in the United States, and is handled by the U.S. Citizenship and Immigration Service (USCIS) or by an Immigration Judge. Refugee status, on the other hand, is applied for and granted outside the United States. More information about the refugee application and admission process can be found below.

Generally a person must apply for refugee status in a third country after escaping from his or her country of origin and show there is sufficient need for an interview to determine refugee status.  Applicants who fall under the United States refugee processing priorities will be eligible for an interview. The application is processed through the United States Refugee Admissions Program (USRAP) in several countries throughout the world.

If you have already been admitted under Refugee Status, then you do have options to adjust your status to a permanent residence. If you have had criminal convictions, even minor ones, you might face challenges in adjusting your application. For best results and to avoid lengthy delays, speak to an experienced immigration attorney. 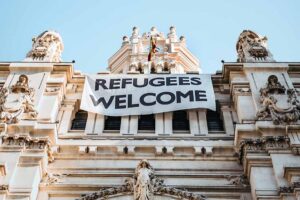 Patel Law P.L.C. is a debt relief agency helping people to file for bankruptcy relief under the Bankruptcy Code. The information provided in this web site is for general information purposes only and must not be regarded as legal advice. The law changes periodically and we make no representations that any of the information is accurate. You are not to make any inference from this website that our firm represents you or would be able to represent you; or that the information contained herein applies to your specific circumstances. You must seek legal counsel to ascertain your rights and obligations.